Zwartbles LOVE Apples I Am Tweeting Irish Farmer This Week 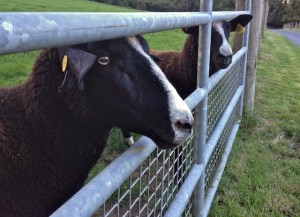