Zwartbles sheep are from an area of Holland called Friesland their main use was for milk and cheese production. Dutch dairying practice changed so much in the last century causing their numbers to  nearly disappear. By the mid 1970's they were entered into the Dutch Rare Breed Survival Trust. In 1985 a Flock Book was formed, and numbers have steadily increased. Zwartbles Sheep were introduced into Britain from Holland in the 1980's then came over to Northern Ireland in 2000; but were not introduced into Southern Ireland until 2005 with the first lambs born in spring of 2006. In 1995, a Zwartbles Sheep Association was formed in Great Britain and Irish breeders were granted membership numbers in 2007. The South of Ireland Zwartbles Sheep Club was formed in 2010. 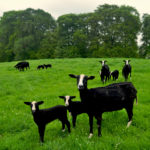 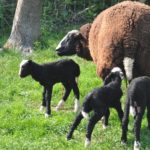 Highly Prolific - Triplets are not uncommon.

The Zwartbles name means Black with a White Blaze. A very noble yet elegant black sheep with a distinctive white blaze from poll to surround the muzzle, two to four white socks up to but not beyond the knees or hocks and undocked tails with a white tip. Like a short horn cow these sheep serve the dual purpose for meat and milk but have the addtion of a very fine thick fleece with plenty of crimp. 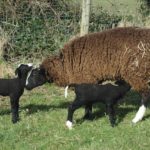 Zwartbles Sheep Association Breed Standard 2010: The Zwartbles has good conformation, with a big frame, medium bone, good length and a wide pelvis. A tall sheep with a striking and naturally polled head, a long neck and an erect posture. It is an upright and fully built sheep with an alert and lively character. Both sexes are pear–shaped when viewed from the side or from above and the ram has a more muscular formed front part and a wider head. 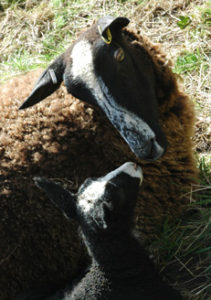 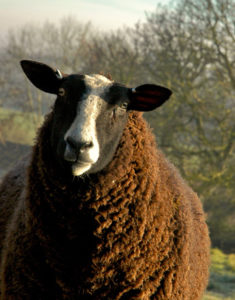 Naturally polled (have no horns).

The Zwartbles sheep are considered to have a superior conformation that can be passed down to the next generation, it has many characteristics considered desirable for cross breeding, its large frame, prolific nature, milky ewes, and fast growth rate. Commercial sheep farmers have become aware of the Zwartbles reputation for rapid growth, a low fat carcase and are successfully using the rams as maternal sires. The ewe lambs produced are retained for breeding and crossed with any of the main terminal sires.

Zwartbles fleece is medium to fine with excellant crimp along the length of fibre. It's dense black to chocolate brown with sunbleached tips. There can be fine silver hairs dispersed throughout the wool which gives a lustre appearance but it is not a lustre fleece. Older ewes have white hairs on their quarters but this is not kemp. 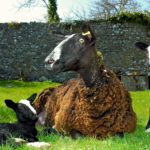 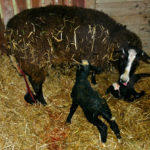 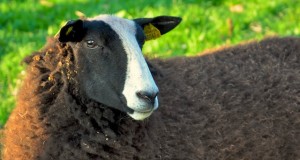 Technical Information About The Fleece